The jumpers on the back of the DVI Pmods are for adjusting the deskew for the input signals. You can find where the jumpers are connected in the schematic: https://raw.githubusercontent.com/icebreaker-fpga/icebreaker-pmod/master/dvi-12bit/v1.1b/dvi-12bit-sch.pdf

And what they do you can find in the datasheet: http://www1.futureelectronics.com/doc/SILICON%20IMAGE/SII164CTG64.pdf (Page 16) 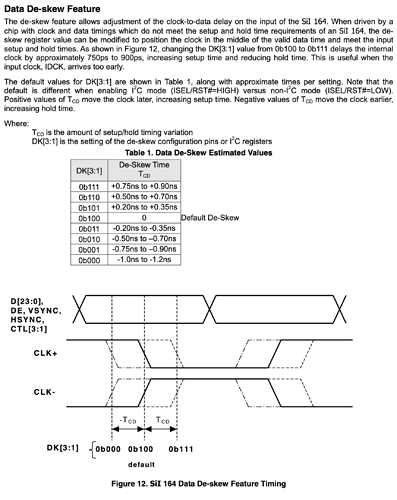 thanks for the informations
I let the module as it is initially and tried to generate a signal
with the vga pmod I was generating a colorbar vga 640x480 60hz
with a 25.175Mhz pixel clock
I tried to adapt to hdmi using the same timing with ck = pixel clock and int = 0
and de = the de used intenally when I generate the lines…
but I don’t get any image

HDMI receivers are unfortunately much more picky about the timings. You have to be much closer to what the receiver expects. There are some USB capture devices that are more forgiving, or you can convert it back to VGA if you have a VGA monitor. Otherwise you have to extract the supported video modes and timings from the monitor/tv and check if you can generate something that it will be happy with.

You can try out the existing designs for the iCEBreaker in the examples repository: dvi-4/-12/-24. Or some of the ice40 playground projects like HDMI text.