This is figure of PMOD Digital Video Interface. 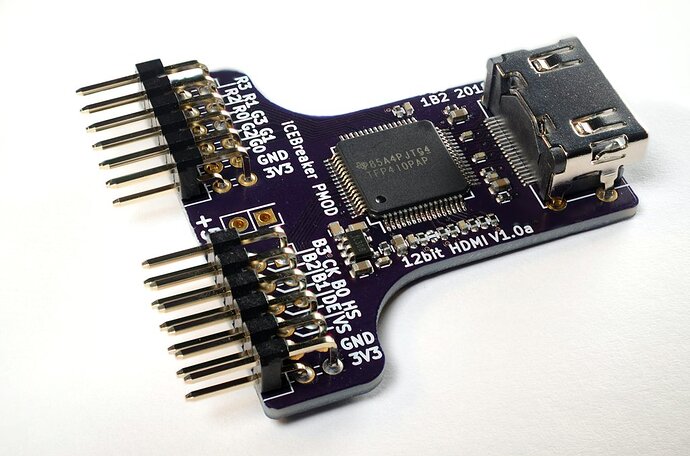 Welcome to the forum. I agree that the DVI pmod should work with your dev board. We don’t have examples for your board.

We do have examples for the DVI pmod for the iCEBreaker and iCEBreaker-Bitsy FPGA dev boards.

As you can imagine we are not spending time developing examples for third party development boards, but rather for our own. But you might be able to port the iCEBreaker examples to your board without too much trouble.

Thanks for your reply.
I wonder the differences between iCEBreaker and iCEBreaker-Bitsy FPGA dev boards.
If I want to port the example projects you provide to my own board, does that mean I only need to modify pins assignment?
And, where can I find the price of Pmod DVI?
Hope your reply.

It might be enough to just change the pin constraints aka. pin assignments.

You can find the 12bit DVI PMODs from US 1BitSquared Store, German 1BitSquraed Store and Mouser Electronics.

Thank you very much.
And what is the difference between dvi-4bit, dvi-12bit and dvi-24bit Pmod DVI?

The answer is in the name. bpp stands for Bits Per Pixel. Meaning:

Due to how the encoder chip works and how it’s wiring is designed, each of these modes requires a separate wiring of the PCB. This is why there are three different Pmods available.

I recommend you spend some time reading the datasheet of the encoder chip itself. You will get the underlying understanding on how the encoder chip works. What you need to do to send your pixel data and so on.